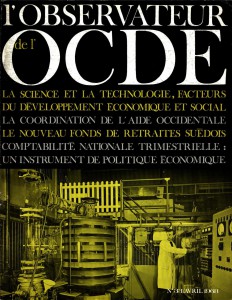 Ludovic Fulleringer’s ongoing PhD project deals with the history of the OEEC and OECD “science and technology policies“ from 1948 to 1976. This dissertation aims to historicize the transnational paradigms and networks that supported the development of these policies and their politics. Following the path of scholars such as David Edgerton or François Jacq, this research focuses on actors’ understanding of the organization of science. This project questions naturalized visions and invented concepts such as “science policy” or “economics of science”. Following closely the major “science policy“ negotiations within and outside the OEEC and OECD, this work will cast new light on the history of science policy. Based on archives from several IOs (mainly the OEEC and OECD but also UNESCO and NATO), national ministries (France, USA), this dissertation analyses the recurring international concerns regarding science and technology (productivity gap, investment in education, «technology gap», etc.). In doing so, this dissertation analyzes how the «science policy» paradigm was constructed, used and shared at the international level.

Prologue: One scientist’s traverse of first half of the the twentieth century’s

I. Entering the realm of an international economic organisation and what it meant for science administrators (1948-1957)

Chapter 1 : Born from the “productivity gap”. About the gathering within the OEEC of some mavericks interested in science’s administration.

Chapter 2 : The growing hegemony of research in the overall scientific activity and what it owes to the rise of the “national economy”.

Chapter 4 : Tilting at numbers. Bureaucratizing science organisation in the wave of the “scientific manpower gap”.

Chapter 5 : Development and the challenge of the new states: inventing “science policy”.

Chapter 6 : Living in a technocratic fantasy. A new look at the so called “golden age of science policy”.

Chapter 7 : Why and how did we save the science policy paradigm? A study of the “technology gap” crisis.