Samuel Beroud’s Ph.D. project explores the reaction of the governments of the four major Western powers (USA, Federal Republic of Germany, France, the United Kingdom) to the economic crises of the “long 1970s”. Analyzing their bilateral and multilateral discussions in fora such as the Group of Five, the Group of Seven, the OECD and the IMF, his research will show the influence of geopolitical, political and social objectives on the major international and domestic economic decisions during the 1970s. His research will show that the intertwined monetary, energy, economic and financial crises of 1973-1975 fueled the fear among political elites that the scenario of the 1930s was being repeated. Challenging the idea of an ideological turn from “Keynesianism” to “monetarism” and the concept of “neoliberal revolution”, his PhD will show that under US and German leadership, the main Western power primarily attempted to prevent the collapse of the postwar capitalist system and that many decisions leading to the transformation of capitalism had initially a pragmatic and defensive objective, and in several cases emerged as the only solution when major powers could not reach a compromise. To demonstrate this hypothesis, his PhD is based on published and unpublished documents from the national archives and personal papers of the political leaders of the US, Germany, France and the United Kingdom. 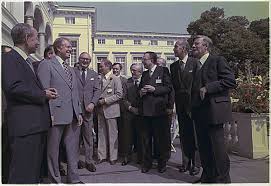 Part I: Capitalism in Crisis: the specter of the 1930s

Part II: Surpassing the Crisis: the era of New Realism

Part III: Beyond the Great Depression: New tools to combat a new crisis.