The OECD and the global political economy, 1948 to present 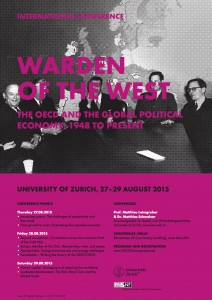 Even though ubiquitously mentioned in current affairs and in academic writing, the Organization for Economic Co-operation and Development (OECD) has remained one of the most elusive and under-researched international organizations. Founded in 1948 as the Organization for European Economic Co-operation (OEEC), a Western European institution charged with monitoring Marshall Plan aid, the organization was reorganized in 1961 as an Atlantic (including the US and Canada), and then triadic (Japan joined in 1964, Australia and New Zealand by 1974) think tank, in which Western countries coordinated their policies both in the Cold War setting and vis-à-vis the emerging power-bloc of decolonizing countries in the global South. After the end of the Cold War, the organization finally expanded its membership to include some emerging market economies and established its reputation as a key knowledge hub in the current era of globalization. Throughout its history, the OECD has worked on almost every subject of interest to national governments ranging from education (PISA rankings) to statistics to the environment, it has developed a series of unique modes of governance, and it has with varying success played more generally an important role as a warden of the West and of capitalist development.

However, we know surprisingly little about the OECD’s longer-term dynamics, internal politics, or relations with other international actors. With this international conference we want to open up the history of this fascinating organization as a field of historical, critical, and source-based research. Political scientists, sociologists, and scholars interested in international political economy only started in the wake of the constructivist turn of the 1990s to pay serious attention to the OECD. Yet by focusing mostly on the OECD trajectory since the late 1980s, these accounts have not yet explored the historical dynamics and transformations of the organization since 1948. Further, while highlighting the soft power function that does characterize the present-day OECD, existing research has tended to downplay or even ignore the use and diffusion of «power» and political interests within and through the OECD and to neglect and thus obscure the foundational role of the OEEC/OECD’s entanglements in late colonialism, in the Cold War competition, and the North-South tensions following decolonization.

To this first historical conference on the history of the OEEC and OECD we invite original source-based contributions that address the long-term history of this organization and analyze the OECD not as insular, but in its multiple relations to member states and other international organizations. In particular, we are interested in the organization’s role in the Cold War conflict, its function as an ante-chamber to harmonize Western interests vis-à-vis the global South, the relation between the OECD and other international organizations such as UNCTAD, the UN, the EEC/EU, the ILO etc. Further, we would like to learn about the OECD’s «peripheral» member countries (such as Ireland, Greece, Portugal, or Turkey) relation to the Organization as well as about the organizations entanglements in the internationalization and development of economics as a discipline.

M. SCHMELZER – Postdoctoral research fellow at the University of Geneva. His forthcoming monograph, entitled The hegemony of growth. The making and remaking of the economic growth paradigm and the OECD, 1948 to 2010 will be published by Cambridge UP in 2016.

V. GAYON – Lecturer in sociology of organizations at the University of Paris-Dauphine. Author of numerous articles on the historical sociology of the OECD.

R. GRAF – Research Director at the Center for Contemporary History (Potsdam). His current research focuses on the history of the energy crisis of the 1970s.

W. HYNES –  Senior Economist in the Office of the Secretary General at OECD and Adjunct Professor in International Economics at the Johns Hopkins University School of Advanced International Studies.

S. KOTT – Professor of history at the University of Geneva and co-founder of the History of International Organizations Network (www.hion.ch). Recent publication: (with Joëlle Droux, ed.) Globalizing social rights. The ILO and beyond (2013)

C. PERNET – SNSF research professor at the University of Basel. Her research interest include the history of international organizations, cultural history as well as nutrition

T. STRAUMANN – Professor of economic history at the University of Zurich. Author of numerous contributions on financial and monetary history.

J. TANNER – professor of social and economic history at the University of Zurich. Author of numerous contributions on 20th C. Swiss and European history.

R. WOODWARD – Senior Lecturer at the University of Hull. Author of numerous articles on the political economy of tax evasion and financial fraud. Author of The Organisation for Economic Co-operation & Development (2009).

S. BEROUD – PhD student at the University of Geneva. He is currently working on a dissertation entitled «Beyond the Great Depression. The transformation of international economic policies in the long 1970s.

I. BOROWY – Lecturer and researcher at the RWTH Achen (Germany) and Birbeck College (London). She has worked extensively on the history of global health and international organizations during the 20th century.

R. BÜRGI – PhD student at the University of Luxemburg. Her research focuses on the role of the OECD in post 1945 educational expertise.

P. CARROLL –  Professor at the University of Tasmania (Hobart, Australia). His research focuses on international governance and international organizations. Author (with Aynsley Kellow) of The OECD. A Study of organizational adaptation (2011)

E. COMTE – Max Weber Postdoctoral Fellow at the European University Institute (Firenze). His research focuses on the formation of the post 1945 European migration regime and highlights in particular the key role of Germany in shaping this regime.

L. FULLERINGER – PhD student at the University of Geneva and the EHESS Paris. His research focuses on the history of science policy at the OEEC and OECD.

F. GALEAZZI – PhD student at the University of Rouen. Her research focuses on monetary and financial cooperation at the OECD from the 1960s to the 1980s.

C. GERMOND – Assistant Professor at Maastricht University. She has published on European history after 1945, Franco-German relations and the history of the Common Agricultural Policy.

W. GRAY – Associate professor at Purdue University. Co-editor of the Encyclopedia of the Cold War (2008), he has written on German arms and nuclear exports, the Deutsche Mark, and US-European relations.

M. HADJIISKY – Senior Lecturer at the University of Strasbourg and the SAGE (Societies, Actors and Governments in Europe) CNRS lab. Her current research project deals with the contribution of the OECD to the international circulation of public administration models.

H. HARTMANN – Research fellow in contemporary history at the University of Basel and Visiting fellow at Princeton University. His current project focuses on post 1945 rural and agricultural development in Turkey and the entanglements between national and international concepts of modernization.

W. KAISER – Professor at the University of Portsmouth and Visiting Professor at the College of Europe (Bruges). His current research studies the history of the present-day EU in the context of a wider web of international organizations.

A. MARKOVIC – MA student at the University of Zurich. His master’s thesis analyzes the social and political position of economists and their discipline in 1950s-1960s Yugoslavia.

I. OBADIC – PhD student at the at the European University Institute, Firenze. His PhD project entitled In Pursuit of Stability. Yugoslavia and the European Community examines the origins and evolution of EEC-Yugoslav relations during the Cold War.

S. PAOLI – Research Fellow at the University of Padua in the context of the project «Changing Patterns in Migration Policies and Flows in the Euro-Mediterranean Area from the Oil Crisis to the 1995 Barcelona Declaration».

D. PESTRE – Research professor at the EHESS (Paris). His research interests include the history of the environment, the governance of science and the process of globalization.

D. STINSKY – PhD student at Maastricht University. His dissertation project analyzes the role of UN Economic Commission for Europe (UNECE) in the context of economic cooperation in Europe and the Cold War.

H. TÜRK – Research Fellow at the German Historical Institute (Paris) and at the University of Duisburg-Essen. Currently works on a history of the International Energy Agency.